The increasingly frequent occurrence of an economic crisis is as sure as every sunrise. Develop adaptive skills in the worst of the dark because, as in the tale of the gazelle and the lion, when dawn breaks, you better run.

Both the gazelle and the lion do not worry about whether it will dawn sooner or later. They accept the existence of a new day and focus on the only thing they can control when it comes: the development of their speed to hunt or avoid being hunted. In this story, the act of running ensures the survival of both species.

At the business level, and particularly in the commercial function, the analogy with the ability to run fast to survive could be established with the capacities of resilience and adaptability as the best tools to deal with change and crisis and then be able to relate in a way more effective with an uncertain and complex future to “model”.

Uncertainty. Circularity, change and crisis have always accompanied us, being a source of innovation and evolution. At the same time, our misunderstanding and obsession with the concepts of security and stability have been the cause of great pain in humanity by experiencing over and over again throughout history its absolute invalidity and letting us poorly prepare ourselves to relate to them.

In the modern world, this is becoming more and more evident, mainly due to the growing economic, social and cultural interrelationships and interdependencies, a product of globalization and the relocation of production chains that began in the last century; and more recently, at the dawn of the fourth industrial revolution, with the continuing disintegration of physical, digital, and biological boundaries; which brings with it continuous and unsuspected disruptions, more speed in the changes and simultaneity in the effects.

There is no point in wasting time predicting the next economic downturn. The list of wrong predictions by economists would far outnumber the right ones. First because of its uselessness, and second, because of the impossibility of doing it. Geopolitical and health issues such as the current COVID-19 pandemic, natural disasters, technological disruptions and the economic cycles themselves are uncertain in themselves and can have decisive consequences on the fate of your company.

The volatility that all these uncontrollable variables introduce into the business environment shapes this true new normality and in the face of which we should accept change and the uncertainty that this entails as our fellow travellers.

But what do we mean at the business level with resilience and adaptability?

Resilience is a concept that generally refers to the ability to adapt favourably to traumatic situations. For its part, adaptability is the capacity that makes resilience operational; it allows the organization to reconfigure itself in the face of a new order situation and learn from experience. Adaptability is a property of complex adaptive systems (CAS); hence some authors affirm that when an organization acquires this type of property, it becomes more like biological systems than mechanical and rigid, typical of traditional administration.

Talking about complex systems or in-depth adaptability would overextend this publication and distract us from the central idea, but they will be reviewed in future publications due to their relevance. The critical thing to point out here is that adaptability is not an organizational property that is reached from a simple voluntaristic or declarative act, nor is it the same as flexibility, which is a temporary change to later return to an initial state. Adaptability as a general principle is not a model but an authentic way of being, which is made operational with concrete and complex tools.

Sergio Melnick and José Miguel Barraza, in their book ETAN (Anticipa, 2008), teach us that, in the business sphere, “adaptability rests on four large areas: a) ideas and people, since this requires new ideas and learning, b ) systems and technology, since it is not possible to organize productive and evolutionary competitive networks in any other way, c) processes, since technology drives processes that are the operational axes of the organization and d) management, particularly change management”. These authors brilliantly conclude that “adaptability is the type of response that is required in the face of a system that moves very quickly and in the face of a fuzzy short-term future, that is dominated by complexity, and that requires responses of an evolutionary type.”

In the same work, these authors argue that the type of efficiency required today should not be measured exclusively by cost management but by the robustness of adaptive capacity, something to which we fully subscribe. Whether in specific business functions or across the board, companies traditionally faced with a crisis, but also under normal conditions, undertake sharp structural cost cuts to gain resilience. This action is reasonable in the face of insolvency risks and in the face of a narrow range of financial leverage options, not to mention in the case of an SME. But when this type of risk is not the case, something that may sound reasonable to gain a few return points in the short term can bring more problems than benefits in the medium term.

“The only certainty is that change and adaptability is the best form of resilience. However, the latter is not an organizational property that can be reached from a simple voluntary or declarative act…”

The reasons are obvious. From the point of view of the value proposition, competitiveness on the cost side has technological limits. In other words, the cut must be limited by the quality of the product, customer satisfaction and working conditions to attract the talent that is the source of this material and intellectual wealth. Here there is a risk of sacrificing equipment or functions that separately or in synergy with others are drivers of value.

We are all affected by the current crisis, and indeed we will be again with the next one, which is as true as every sunrise. The point is that the ability of resilient organizations to prepare despite frontline challenges is a critical differentiator for coming out stronger. Accelerating digital transformation is key and marks a performance gap between digital leaders and laggards, a gap that could widen between crises. In the commercial function, the spaces for digital development between companies of different sectors and sizes are enormous. We propose to undertake the difficult path, not to wait for the “right moment”, which usually does not come, and to focus on the substantive transformations that the business requires, now, then, as in the story of the gazelle and the lion, when dawn breaks, I’d better run. 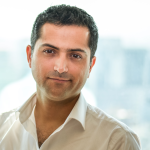 Rodrigo Prado Y.
Entrepreneur, founder, and director at Imppulsor. Professional expert in business modeling and development, commercial productivity and customer experience. Over 20 years of work experience in professional, leadership and entrepreneurial positions. Robust experience in the development of consulting solutions and the deployment of business transformations in companies of varying complexity and organizational maturity.
Related Posts Business transformation: “the challenge of balancing systems, skills and beliefs”. The importance of solving the right problem.
February 23, 2022